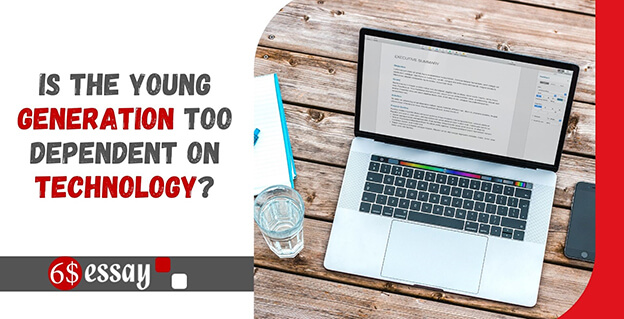 Is the Young Generation Too Dependent On Technology?

Technology plays a significant role in human life. Most of us find it challenging to remember when computers, phones, tablets, and other devices were rarely a part of everyday life. It certainly makes life convenient, safer, enjoyable, and more manageable. Several people wonder whether society is too dependent on technology or not. Life without technology is hard to imagine practically.

With time, discoveries and inventions increased, and man’s progress started to reach the peak of technology. Now the new innovative technology helps the man in every part of life. However, too much use of it makes people too much dependent on it. It is safe and comfortable, but constructive and destructive are there at the same time.

Several young people can’t stay longer without their phones or other gadgets. They are usually attached to their phones. Young people are now accompanied by smartphone devices and other gadgets in almost all situations, such as sitting at their desks at school, eating dinner with family and friends, or even going to bed. It seems that we are dependent on technology for everything they do. There are some effects of technology on several other things, so let’s have a look.

Technology has a significant effect on every aspect of society. It has extended how people are entertained and communicate. Technology has augmented the ability to travel and impacted social change within societies. The more technology has progressed, the more significant impact it has on the whole community.

Technology has also impacted human’s physical, mental, emotional health and wellbeing too. From causing eyesight weak to a stiff neck and heightened anxiety, ultimately, it has made us overly dependent on it.

The Social Effect of Technology

Humans are creatures that crave interaction with each other as it has become part of our nature. Technology is slowly eliminating the need to interact with people in person.

For instance, social media platforms' development allows people to engage with numerous other people they hardly know. People now create a complete social circle of friends online that they may not have met in real life.

Effects on How We Communicate

Before technology, people need to meet in person for communication. The use of messengers and other social platforms enables long-distance communication. Roughly two centuries ago, a telegram was invented, which enhanced the speed at which two people can communicate back and forth from huge distances.

Then the invention of the telephone changed everything. Telephone technology has made it possible to speak with people without being in the same location in real-time. Nowadays, smartphones have made it possible to text, call, and even video each other.

Before the innovation of technology, entertainment was restricted to things like going out to the circus, dinner or party with friends and family, or playing. Then cinemas were designed, and people started watching movies on big screens. Once the TV was presented, people stopped leaving their homes to be entertained.

The ability to consume entertainment became more convenient as a result. These days, other options of entertainment options are available outside the home. It is easy to stream tens of thousands of shows, movies, and sports games, from TV or computer.

A person is experiencing special moments like the last minute of a sports game, family gathering, or favorite song gets played at a concert. Are you enjoying the moments, or are you holding up your mobile device, recording everything to post it on social media later? If you're busy recording it, you are just experiencing it through a screen as everyone else will once they see your video; this way, you don’t make moments enjoyable.

Even though humans are social creatures, they need to learn how to spend time with their thoughts. If you suddenly start to feel anxious because you have no connections with anyone and aims to interact with someone via phone or computer, technology has made young people too dependent on having a connection at all times.

Every single second you check your mobile phone to check if there’s any notification. If you continuously use your smartphone to check the play games, social media, surf the web, use your apps, and more, you are addicted.

Another way is you get a dopamine rush whenever your phone makes a sound. It is the anticipation of checking your phone repeatedly that causes this rush, signifying that you are addicted to your mobile phone.

Technology has progressed to stay at home for the rest of your life without going outside. Today, most social interaction is occurring online, and everything you buy (from groceries to clothing) is through some app, then the odds are that people don’t get outside enough.

Brain games indeed have some advantages, like enhancing hand-eye coordination and increasing memory skills. Although people think that playing brain games is how you get smarter, then they are mistaken. Reading books makes a person more intelligent.

Why Are Technology Assignments Difficult For Students?

Studying technology is not easy as it is a vast field and covers several areas. So, it becomes complex for the student to solve such assignments.

For this purpose, several academic professionals are available online that provide technology studies essay help to students. They offer well-written and original works to them to get higher grades in their class.