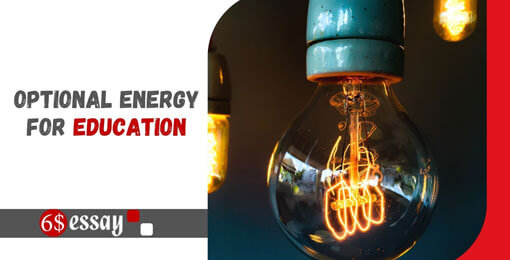 While a majority of us sit in the air-conditioned rooms, bored with the teacher's lectures in our science class, the students in the sub-Saharan and war-torn third world countries wake up at dawn to attend classes in order to get done with the lecture while there is still some light. This is not an exaggeration and has been backed by the statistical data published by various renowned newspapers, magazines, organizations, and research centers, including the United Nations, World Health Organization, and the World Bank.

A renowned university in Australia carried out one such research, and the results stated that an educational institution with nearly 75,000 pupils is consuming five hundred kilowatts per hour (kWh) on each student per year. While this might seem too much electricity consumption per student to you, you would be surprised to see how sharply contrasting are the numerical stats for the students in African and middle eastern states with unstable or underdeveloped state governments and economies. Most of the schools in these countries have very little to no access to stable electricity connections, with sub-Saharan African countries topping the list.

Similarly, a large majority of schools – both primary and secondary, as well as higher education institutions – in Peru do not have access to power. The same is the case with over fifty percent of villages in India and Bangladesh. This means that collectively, more than eighty-eight million students worldwide are deprived of electricity in classrooms. To sum it up, that is around one-third of the adolescent population and every one in three children across the globe. When we talk about lack of electricity, we do not mean luxuries refrigerators, generators, or computers, but the necessities such as light bulbs, fans, and running water.

In most of the countries discussed above, a majority of them have a rapidly growing population. When the population of a country grows, it increases the number of adolescent and teenage children the most. As a result of this, the consumption of amenities such as electricity is increasing, as well the state governments are pressurized to ensure the provision of power to schools. In addition, the increase in population is also leading to the emergence of new opportunities, with the help of expansion of energy services, formulation and development of new sectors, and deployment of technologies in corporate and state sectors.

With so much potential growth in multiple areas, the question arises as to whether the workforce shall be able to get properly equipped in order to overcome the obstacles in the education sector, leading to growing illiteracy rates.

Why is it a Big Issue – What Illiteracy Costs?

The world recognizes literacy playing a major role in the development of not only a state in economic terms but also the development and civilization of a nation as a whole. A good literacy rate is a good economic indicator, as wells as increases a state's overall human capital. The goal of global education is to emphasize the provision of education to every individual, regardless of their social status. The global educationalists are focused on ensuring that the education in schools, especially to the adolescent's children – is proved in-discriminatorily. This is to make sure that these children recognize their rights and have an active sense of the world that they are living in.

However, due to various reasons, a majority of the under and undeveloped countries are unable to ensure that. The reason for that is that unlike the rich countries, where the students have access not only to necessities and tools for education in schools as well as their abodes, the children in the underdeveloped countries cannot even study under proper light. This can lead to disinterest, as well as poor quality of education, rendering them incompetent when compared with the kids of developed countries.

Additionally, the children from such states also have fair access to several other luxuries such as academic help, which is something the children of Africa cannot afford. In that case, many cheap assignment writing service providers are extending their services to remote countries such as those of the African continent at affordable rates.

In recent times, an initiative was taken by China and Africa collectively and has been a highlight in the educational world. Around sixty to seventy percent of the unfarmed fertile or barren land was noticed by china, who in return offered to help the continent in crisis. China offered to modernize the agricultural sector of the continent by investing in its infrastructure for roads, water, and energy.

Noticing the success, a whopping number of train farmers received agricultural technology demonstration centers, which would help them in educating on the use of effective modern practices to enhance the efficiency of irrigation, mechanization, and fertilization for improved crops. thus, it can be safely stated that it is not impossible to innovate means to ensure that the educational institutions in the underdeveloped states of the world have fair access to energy.

Following the success of the China-Africa initiative, almost twenty-five of the underdeveloped African countries has employed such initiatives through creating development centers since 2006. The emergence of these education centers also brought a very common but critical problem to the front. It was found that almost ninety percent of the total farmers in these countries lacked basic agricultural knowledge. The lack of familiarity of the workforce of a country with the basic technological systems speaks volumes about its state of backwardness. Not in a derogatory manner, but it has a lot to do with the poor electricity supply to the most critical of areas, the educational sector.

The links between technology, development, and education have been well-documented throughout the years. What is less clear is whether enough is being done to help strengthen this bond and yield the desired results ultimately. A majority of intellectuals argue that the governments are responsible to invest in the educational sector and ensure the fair access of schools to electricity. However, many types of research show that the private sector – for instance, the capitalists and investors – also have a lot to gain, and thus should take part in the electrification of schools.

Price Calculator
Disclaimer: Every order prepared by 6DollarEssay.com is solely for research purposes. Students are not allowed to submit the paper as it is to their college/universities. In case, the student submits the paper as it is, he/she will be solely responsible for it.