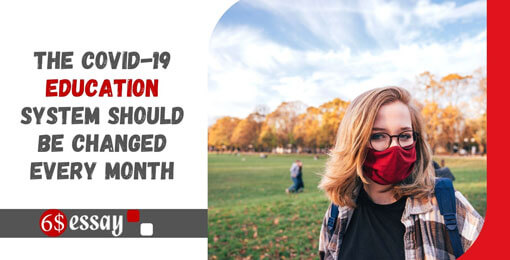 The Covid-19 Education System Should Be Changed Every Month

All aspects of life have taken a whole new meaning as an aftermath of the pandemic. As the world continues to be impacted by a small microbe that made its appearance in the ending days of 2019, one cannot expect anything to be as it was, anymore. And of course, the educational sector is no exception. It would not be wrong to say that the educational sector is the industry that has suffered the most under the shadow of the Coronavirus.

When we talk about the academic industry being impacted by a situation as severe as the ongoing pandemic, what we mean is how it has affected and continues to affect the personnel associated with this sector. This includes the students, teachers, administrative staff, and the government altogether. You might be wondering; 'why the government?' Well, it is because when an industry suffers – and as important the academic industry at that – it is the government that bears the consequences, not only in form of the economy but also in the shape of its image before the world. A country with low literacy rates is pushed into the category of 'third-world countries', which is a title that about two-thirds of the world states are striving to get rid of, due to the associated consequences with it.

The virus has played a part in lowering the literacy stats in the most developed countries and the poorest all the same. Be it the United States of America or the striving South African States such as Nigeria or war-torn third world countries like Egypt or Yemen, all of them are experiencing a growth rate of illiteracy following the pandemic. One of the most common reasons is the increasing fear of the virus due to the health risks that it poses, especially to young children and teenage students.

Additionally, the on-and-off reopening and closing of schools have also led a majority of students and parents to put a pause on their children's education. However, the major cause behind the drastically falling literacy statistics throughout the world has to do with the financial regression faced collectively by the states as well as individually by the families. The pandemic put a stop to multiple activities, including trades and businesses, forcing millions to fall into the curse of unemployment. This has been a driving force behind parents reconsidering the admissions and continuation of the students' education.

Regardless, the COVID-19 has altered the educational sector in a wholly different fashion. Let us take a look at how it continues to influence the academic world, and how long shall the aftereffects last.

What Does This Mean for the Future of Learning?

With no training, and experience to testify its efficacy, a large majority of the world believes the alternative education system to on-campus classes, the online learning system to be an untidy, unplanned strategy incapable of yielding effective or long-lasting results. As a result of this, it is widely believed that following the COVID-19 pandemic, a hybrid model of education will emerge that will use a fusion of the conventional teaching styles and methods and the distant learning tools. Ultimately, this new model of education will play a significant role in accelerating the educational processes.

Many educational institutions such as universities and high schools have experienced a successful transition from the conventional mode of learning to distant learning systems. For instance, a renowned Chinese university managed to get over four thousand courses on-line as it transitioned into a remote educating system, the Ding Talk ZJU.

Despite everything, the changing educational models have a plethora of challenges to overcome. For example, a lot of students are deprived of the luxury amenities such as a stable internet connection, or access to digital devices, which strops them from accessing the education that they have paid for. The struggle to participate in digital learning impacts the States as a whole, and the gap is visible when the income brackets of countries are compared.

In the United States of America alone, this gap is very prominent and extensively experienced between the communities of students coming from privileged and non-privileged backgrounds. In the developed States with a low poverty ratio, over 60% of the students have access to computers and the internet, whereas the students from other states with a high unemployment and poverty ratio do not. Whatever might be the case, the world is struggling to make the new systems work, and this includes the remote learning system as well. For instance, more colleges and schools are offering grants to students in order to ensure fair and equal access to the tools to avail remote education. If you find yourself overcome with the feeling of discrimination in your academic career, contact a professional writer for grant proposal writing to appeal for a grant to your institute.

When the virus initially made its appearance, nobody thought it would continue to leave such a long-lasting influence on the lifestyle. Unless you have been living under a rock for all this time, it is impossible for anyone to not face the wrathful aftershocks of the pandemic. After the economy, it has been the students who have lost the most during this time. The reason is that a majority of pupils have missed the most important academic experience of their life, some in the shape of missing college admissions, while others in the form of missing their significant primary and secondary years in school.

Everyone had waited for the situation to let the situation settle down so as to make a decision on whether the world should adapt to the new modes of conveying and pursuing education, however only for it to get worse. Due to this, educational institutions have incorporated the ages-old virtual meeting platforms such as Google Meet and Skype as well as the latest addition to the video-conferencing platform's family like ZOOM or Google Classroom into their educational systems as a permanent component. Additionally, the technological sector has started to overwork in order to produce more reliable distant-learning platforms. With all this, it would be safe to assume that technology has now become an inseparable element in the educational system throughout the world.