How Does Sleep And Wake Cycles Affect Learning 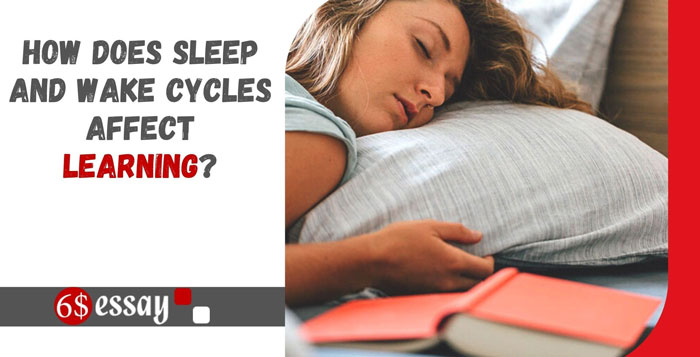 Growing up, we all kids have heard one thing over and over again, sleep early, eat good, and your learning cycle will automatically turn productive. This is one of the rare myths that actually have credible and authentic researches backing it up. While you must have always gotten a lecture about getting proper sleep a night before an exam, the effectiveness of sleep and its power goes beyond the wonders of performing well in exams.

According to researches conducted over the years, science has made it well and clear that sleep can increase a child’s thinking ability, focusing ability, productivity, and effectiveness in memorizing. Getting enough amount of sleep to keep one going is especially important for children and adolescents who are going through the age of brain development. However, this is the biggest mistake parents tend to make when they fail to realize the importance of sleep for a growing child.

Across the United States, students of the years of elementary, middle, and high school are neglecting the importance of getting enough sleep and its direct effects it can have on one’s productivity, efficiency, and focusing ability, negative and positive both. You may be thinking, why is sleep so important for a student’s ability to learn, memorize, focus, and study with effectiveness. Then let us tell you how that works according to a human’s brain biology. Due to lack of sleep, be it teens or children, they can get caught up with the problems of losing focus to attention, a decline in the ability to effectively solve a problem, and severe issues with memory.

As a result of that, students can have a problem in memorizing, learning, and the overall studying process as well. Not only that, but lack of sleep can also have a direct impact on one’s emotional well-being and causes extreme mood swings. A child may face a growing emotional problem due to lack of sleep, as well as substantial behavioral problems. This is a significant problem that can later adversely affect one’s high success rates. We have even seen the brightest and smartest teens and children going downhill on their slope of success once they get into the cycle of sleep deprivation. Lack of sleep often results in a lack of oxygen supply to the brain and that is what causes major issues inside a child’s head.

Are Children Getting Enough Hours Of Sleep?

For every individual and age group, the needs of sleep hours vary by a huge margin. Hence, we cannot say for sure how many hours of sleep are ideal for everyone. However, roughly, there is an ideal number of sleep hours every age group must try to achieve. 6-12 years of a student going to school must get 9-11 hours of sleep in the entire day in total. As stated by the National Sleep Foundation. Although, the number varies for the age group of 13-19.  For those teens, experts say that they must ensure at least 8-10 hours of sleep in a day. An interrupted night’s sleep, however, is the best of them all. It stands highly more essential than any other sleep time of the day.

With that being said, as unfortunate as it can be, researchers have found out that the children of the United States are not getting a substantial amount of sleep according to their age groups. Be it because of the load of academic and co-curricular activities, or just the general neglect of the importance of enough hours of sleep, the children of the United States are failing to get enough hours of sleep in their bags. To put it into numbers and a clear perspective for our readers, the researchers have found out that around 25% of the children of the United States, from the age groups of 6 to 19, are not getting enough sleep and facing extreme issues caused by being sleep deprives. When these children fail to bag enough hours of sleep at night, their productivity tends to take a big hit and their schedules automatically turn to more hours of sleep in the daytime. Which, as a matter of fact, is bad for productivity, as well as the general health of a child’s brain.

When it comes to sleep problems and attitude problems as a result of that, our minds automatically turn to teens. But the caser is flipped here. According to the researches and surveys, more sleep problems are found in the age group of adolescence. In fact, they stay highly prevalent in their age group. According to the data obtained by the CDC, it became clear that up to 57% of students in middle schools are facing sleep problems, 72% of students in their high schools are facing sleep problems because of lack of sleep, and the most prevalent sleep problems are found in adolescents. So much so that the researchers have termed this problem as insomnia and not just regular issues caused by lack of sleep. As a matter of fact, insomnia is defined as a serious problem involving difficulty in sleeping at night and results in a high daytime sleep alternatively.

How Can Improper Sleep Effect School?

According to educational experts and researchers, it is evident that most of the academic problems students face are because of lack of sleep as it can directly effect on their ability to study productively. In scientific terms, lack of sleep is directly connected to mental functions, which is then bridged to the ability of a student to study and memorize properly. So, it is all connected. Here are some of the most common problems brought about due to lack of sleep:

Wish to write a paper on problems of lack of sleep for your class? Then seek help from our speeches presentation writing experts online right away.