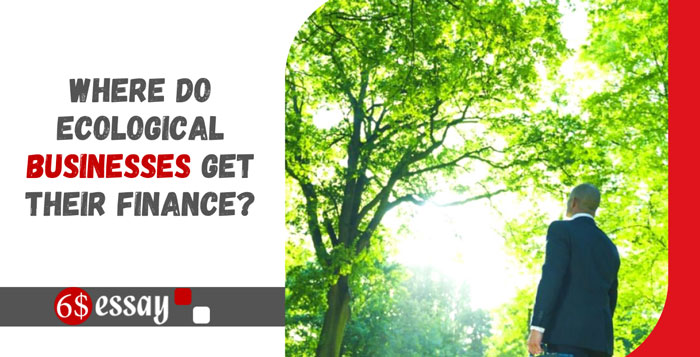 Where do Ecological Businesses Get their Finance

Over the years, students interested in studying and researching sustainability and the impact of ecological businesses on sustainability have few of the very tough questions that had previously occupied the masses minds like a stinging scorpion. The reason is that while a majority of the people might not mind what is going on in the world, there is still a percentage of the population that has been losing its head over climate change. And rightly so, because climate change if ignored can lead to serious consequences that would not only impact a particular region, or group but the earth in its entirety.

For that reason, scientists and ecological enthusiasts have been concerned about matters such as is there a business that would kick start sustainability? This question is particularly important because, in the modern world where capitalism is taking over, it is hard to think of a business or an industry that could have some positive impact on society and the environment. One can have an insight into the catastrophic effects of capitalism by taking a look into how myriad industries are using catalysts and chemical substances which are harmful to nature and the environment, just to accelerate industrial operations. In addition, the invention of substances that are so cruel that they leave a trail of poisonous gases and vial chemical substances in their wake, affecting now only the masses in the surrounding, but damaging the natural features of the place to an irreversible state.

With all this, it is important to think of alternatives that would lessen, if not cut down entirely, the damages of capitalism. However, it is a tough job to do, for such industries which are thriving to go eco-friendly rarely offer much profitability, which makes it a no-go area for a majority of capitalists, industrialists, and investors such as venture capitalists. However, this should not – and luckily has not – stopped researchers and industrialists from pursuing ecological businesses, however, there is one problem; who will fund these businesses. Because as discussed, businesses that promise less profitability are neglected, pushed to the back, or even eliminated from the industrial arena by the venture capitalists.

The reason for that is because it is the venture capitalists that possess the power to make or break a business, if they say no, your business is doomed to suffer. But worry not, for as the researchers and ecology enthusiasts found ways to bring ecological businesses despite criticism, they have found a way to ensure that it remains safe and thrives to the heights that it deserves in the form of "green financing". Let us have a look into what it is, what was the driving force that leads to its birth, and how it works in the financial and business world.

We have already clearly established how important is it for ecological businesses to get proper financing in order to work. Not only ecological businesses, but in modern times, no business can thrive independently without external financing. Perhaps this is the reason why green businesses have suffered in various terms since the period of their conception. If you thought the term green business came into being in the wake of the climate change roars, you are mistaken.

Ecological businesses have long been a center of attention in the academia and literacy circles, with thousands of researchers, students are scientists dedicated to making ways to bring it to the market. However, the disinterest of the investors in the financial world has caused ecological businesses to suffer major setbacks over the course of time.

What Is Green Financing And How It Works?

It is the most basic use of the capital, in fact, the public money in addition to micro-lending support and private loans to support sustainability. The motive of green financing is to encourage more and more people to bring about change that would be favorable for the environment. In easier terms, it is a terminology used by financiers and entrepreneurs to invest their money in a business that is eco-friendly and sustainable. Green loans are determined by various metrics, for instance, they can cover a small product such as an eco-friendly washing machine to a large company vowing to serve sustainable products and services.

Green loans, like any other financial product, also have a broad range of investment options. Take, for instance, the sustainability-focused venture capital companies. These firms are focused on start-up businesses whose products and services are centered on sustainability. The biggest subset of the green financer's focus is on reducing the use of fossils in order to fight carbon footprints and harmful emissions.

Whether you are all for sustainability or do not care about the environment all that much, you must have been living under a rock if you are not acquainted with the term "climate change". As of late, more and more young people are coming out and sharing their dissent over the vile side of capitalism for how it has been impacting the ecological balance of the planet for years. Fortunately, the rage from the public has almost brought governments, capitalists, and financers to their knees, as a majority of them have given in to their motives, or say compromised on their profitability in order to give way to ecological and sustainable businesses. This has been done with the help of "green financing", which is a terminology used for the manner as in how the ecological businesses seek finances for their operations.

Unlike the past times, where nobody paid much heed to how the things which are in our regular consumption are affecting the earth for good, people have started questioning their behaviors and attitude towards the environment, by asking questions such as "is it possible to report on and measure the suitability practices in a credible manner?" and "Is it possible to determine the social and environmental issues that are substantial to our businesses?" and "Can a business deliver values along with services to the society and the environment?" etc.